The Hiroshima/Nagasaki Peace Committee of the National Capital Area

The Hiroshima/Nagasaki Peace Committee of the National Capital Area

The Hiroshima/Nagasaki Peace Committee of the National Capital Area (H/N Peace Committee) was established in 1981 to remember the anniversary of the atomic bombings each August, to support the Hibakusha (living survivors of Hiroshima & Nagasaki) and radiation survivors worldwide, and to work to abolish nuclear weapons for the benefit of future generations. The committee emphasizes the deadly connection between nuclearism and militarism, and the importance of linking disarmament struggle for economic, environmental and social justice.

Today the H/N Peace Committee is respected around the world for its uncompromising support for radiation survivors, opposition to nuclear power and commitment to nuclear abolition.

The H/N Peace committee had its roots in the disarmament movement of the late 1950s and 1960s, especially Women Strike for Peace. Louise Franklin-Ramirez, a long-time peace and justice activist, and an organizer and participant in the first “Women’s Strike,” joined with activists from the Washington Peace Center, Fellowship of Reconciliation, Clergy & Laity Concerned and other DC area groups to organize Hiroshima/Nagasaki commemorations throughout the 1960s and 1970s, often linking them with opposition to the Viet-Nam war.

In the late 1970s, the a-bomb commemorations, increasingly organized by Louise, had become an annual affair. In 1981, Louise, Josephine Butler, Arjun Makhijani, John Steinbach and others formed the ad-hoc Hiroshima/Nagasaki Peace Committee and organized the first National Hiroshima/Nagasaki Commemoration at the Lincoln Memorial. On August 9, 1981, several hundred activists gathered to put ‘Nuclear War & Weapons On Trial,” with Louise leading the successful prosecution. Among the speakers was Arjun Makhijani, who read his moving poem, “Hiroshima Mirror.” In the aftermath of the successful commemoration, a consensus among peace and justice activists and organizations was reached that a permanent H/N Peace Committee be established. Thus was born the Hiroshima/Nagasaki Peace Committee of the National Capitol Area.

Next, Arjun, Louise & John organized a successful Hiroshima/Nagasaki Study Group that met monthly during the first half of 1982 and addressed issues relating to the atomic bombings & the nuclear crisis. John & Louise organized bi-weekly meetings at the Washington Peace Center to plan the 1982 Hiroshima/Nagasaki Commemoration, which culminated in the U.S. Premiere showing of “Prophesy” at N.Y. Avenue Presbyterian Church. Prophesy is a graphic documentary film based on the color film footage of Hiroshima & Nagasaki, shot by the U.S. army under the direction of Herbert Sussan.  It includes particularly gruesome footage of Hibakusha being paraded before the cameras. The featured speaker that year was Professor Michio Kaku.

For the next forty years, the Committee continued to organize annual August commemorations. We developed a close relationship with Nihon Hidankyo (The Confederation of A & H Bomb Sufferers Organizations) and, with their coordination, hosted hundreds of Hibakusha. The Committee worked with local and national organizations to help organize dozens of protests. We played a major role in supporting the Hibakusha attending the Nuclear Non-Proliferation Treaty Review Conference every five years. We sent many delegations to participate in the World Conference Against A & H Bombs, including approximately ten youth delegates. We welcomed delegations of radiation survivords from Chernobyl, Utah, the Marshall Islands, Australia, Kazakhstan, TMI, Fukushima, Iraq, Pine Ridge, and many other places globally And, we did all this as an all-volunteer organization entirely supported by the community.

Some of the highlights over the years are:

1982 The Committee organized the U.S. premiere showing of “If You Love This Planet” , a Canadian film about Helen Caldicott, In defiance of a ban imposed by the Reagan Administration, the Committee showed the movie at Church of the Reformation ton Capitol hill to a large audience;

1982-3- The committee showed the documentary “Half Life” by Dennis O’Roarke that proved that the first thermonuclear test, “Bravo” was timed to deliberately contaminate the people & land of Rongelap and Utirik;

1982, Under the leadership of Reverend Herbert Daughtry, the Committee helped organize over 30 buses to the June 12 disarmament rally in New York City. We organized under Rev. Daughtry’s Progressive & 3rd World Peoples’ Caucus

1983- The Committee organized a colorful “Die In For Peace” attended by several hundred activists. The Die-In was part of the Refuse the Cruise & Pershing 2 protest organized to oppose Reagan’s nuclear build-up;

1983- The Committee organized a reception for a Nihon Hidankyo Hibakusha delegation led by Professor Satoru Konishi. Professor Konishi was the International Secretary of Hidankyo, and was largely responsible for organizing Hibakusha delegations world-wide. (Konishi-san and I became close personal friends over the next 25 years until his death several years ago. (John Steinbach))

1984- The Committee played a central role in organizing the April Actions for Peace, one of the first major Peace  and Disarmament actions organized and led primarily by People of Color.

1985- A member organization of Mobilization for Survival, The Hiroshima Nagasaki Peace Committee hosted 4 Hibakusha, the first of the many delegations to visit the national capital area. In addition, The Committee played a major role in organizing The Ribbon Around the Pentagon.

1987- The committee showed the documentary “:Radium City” by Carole Langer that told the story of the radium watch dial women painters and their terrible fate. Reverend Joseph Lowrey, President of the SCLC delivered the Keynote. The Committee welcomed KwakBook-Soon. A Korean Hibakusha.

1990- The Committee send the first of many delegations to participate in the World Conference Against A & H Bombs;

1995- The Committee, in partnership with Peace Action, organized a delegation of about 20 Hibakusha who visited about 10 states in the mid-West, South, mid-Atlantic and North-East. Our organizer, Yuki Sato worked out of a Peace Action office;

1995- In the spring of 1995. The Committee was instrumental in the rediscovery of the world famous Honkawa School Children’s Drawings at All Souls Church.

1995- On 28 June 1995, in coalition with many other groups, the Committee helped lead protests against the display of the Enola Gay Smithsonian exhibit.

1999- The Committee sent the first of approximately ten youth delegates to the annual World Conference Against A & H Bombs. The purpose of our youth delegate program was to expose young people to the world-wide anti-nuclear movement, and especially the Hibakusha.

1999- On August 6 the Committee welcomed the Stonewalk. Louise Franklin-Ramirez symbolically washed the feet of the walkers.

2003 and 2004- The Committee was a member of a group of historians, scientists, activists and community leaders, called the Committee for a National Discussion of Nuclear History and Current Policy, formed to challenge a proposed exhibit of the Enola Gay, the plane used to drop the A-bomb on Hiroshima. A letter signed by hundreds of prominent individuals asking for a balanced exhibit and a national conference on the atomic bombings was sent to the Smithsonian. When the Smithsonian refused to meet with the Committee, plans to protest the exhibit commenced. Over 10,000 signatures and numerous protest letters were hand delivered to the Smithsonian;

2005- In the spring of 2005, the Committee organized two public receptions at First AME Church and the University of DC for Japanese peace activists and Hibakusha. We also organized a bus to the Nuclear Non-Proliferation Treaty (NPT) Review Conference rally at the UN;

2005- In August, the Committee sent a delegation of 8 persons to Hiroshima and Nagasaki led by Rick Tingling-Clemmons and Phil Wheaton. The delegation included two American radiation survivors, Lori Goodman from the Navajo Nation, and Dennis Nelson from St. George, Utah. Kio Kanda & John Steinbavh played a major role in support of Hibakusha attending the NPT Review Conference at the UN;

2007- Dick Gregory was the Keynote speaker during the Hiroshima commemoration program.

2010- Kio Kanda and John Steinbach, volunteering on behalf of the Committee, were the primary organizers of over 100 volunteer interpreters and bi-lingual volunteers in preparation for the 2010 NPT Review Conference. During the Conference, the Committee helped organize a program for the largest gathering of Hibakusha ever held outside Japan;

2013- The Committee welcomed Setsuko Thurlow, a Hiroshima survivor appointed by the Government of Japan as a special communicator for a world without nuclear weapons. In 2017 she jointly accepted the Nobel Peace Prize in Oslo on behalf of the International Campaign to Abolish Nuclear Weapons (ICAN);

2013- With the DC Labor Chorus and the  Heartful Chorus from Japan, the Committee organized a US/Japan Friendship Concert for Peace at the Sam Abbott Center in Takoma Park;

2013- In the fall of 2013, John Steinbach & Kio Kanda visited Fukushima Prefecture on a fact-finding visit in the aftermath of the nuclear disaster there. Upon return, the Committee organized programs in Washington, DC & Berkeley, CA.

2015- The Committee played a major role organizing in support of the 2015 NPT Review Conference at the UN;

2017- The Committee hosted Ms. Jon Sung Lee. Ms. Lee was 12 years old when she experienced the Hiroshima bombing. Her family were part of the large Korean community in Hiroshima forced to work in Japan during WW2.

2018- John Steinbach represented the Committee at the World Conference Against A & H Bombs;

In addition to organizing the annual commemoration activities each August, The Hiroshima Nagasaki Peace Committee has welcomed radiation survivors world-wide including from the Marshall Islands, Chernobyl, atomic veterans and down-winders, Kazakhstan and Australia, Three Mile Island, as well as hundreds of survivors of Hiroshima and Nagasaki.

Special recognition must be given to the many hundreds of individuals who have worked tirelessly over the years to abolish nuclear weapons and establish peace with justice. Without their support and effort, none of the work of the Hiroshima Nagasaki Peace Committee would have been possible.

1981, Arjun Makhisani and Louise Franklin-Ramirez – Founders of the Hiroshima Committee. 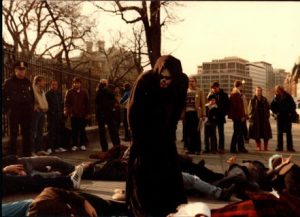 1984, “Die in for Peace” White House against Pershiay and Cruise Missiles

1985, Louise and Paul Collins with a piece of the Enola Gay’s fusilage in Maryland.

1996, Bob Auerbach, Betty Kazemi, and Louise at the International Symposium in Hiroshima

1996, Louise and others at a protest in Tokyo. The sign on the left reads “STOP Nuclear Tests”.

1997, John and Louise at the Japan Peace Conference in Okinawa.

1998, John and Louise at the Korean Cenotaph in Hiroshima.

2000, John and others singing “We Shall Overcome” in Hiroshima, Japan.

2001, Protest Hiroshima Day at the Pentagon. Louise’s sign reads, “Give Back Our Children’s Future!”

Louise at a 1975 protest against school budget cuts.

One thought on “H/N Committee History With Pictorial Record”